Gerry is one of the new rangers who have joined our team at Rhino River Lodge. His passion and enthusiasm for the African bush and its animals is already shining through in his guest reviews. Here we ask Gerry to share a little more about himself with us: 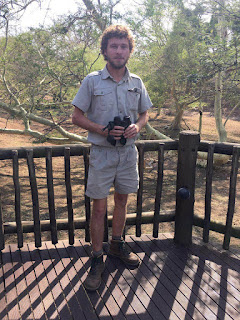 What led you to your position at Rhino River lodge?
I was informed by one of my previous instructors that there was an opening for a ranger position at Rhino River lodge, I had been wanting to get onto Zululand Rhino Reserve for some time, so as soon as I heard about the position I immediately contacted the owner of the lodge to hear if the position was still open, and it was. At that time I was still in Cape Town but none-the-less we set up the interview for when I returned and from there everything just went as planned. I then officially was the happiest man on earth once I’d been told that I could have the position.

What aspect of you new position are you most excited about?
Doing drives every day, as where I worked previously I only conducted them about 3 times a week. Due to that I never really got to see to many interesting things, but now that I have the opportunity to do so, I find that I’m able to talk about a lot more interesting things now to guests. I can now also share more stories about what I’ve seen and experienced in the short time that I’ve been here at Rhino River Lodge.

What is your favorite part of being a game ranger?
My favorite part of being a game ranger is the fact that I’m always out in the bush, which is what I all ways wanted. I just love getting out there to see animals doing what they do on a daily basis even though days go by and you end up seeing the same animals, they are always doing something different. Sometimes it just takes time and patience to get the outcome of the animal’s behavior. Sharing knowledge with the guests that I myself have gathered over time would also be one of my favorites, educating people about what happens out here in the bush from plants, to birds and other general game which we see from day to day. To see the reaction on a guests face after you have told them something new or told them something they would never have believed could actually happen the way it does, really just makes my day. 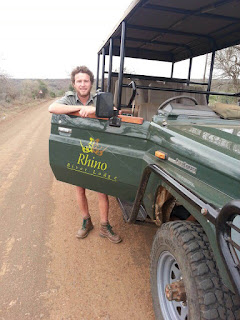 What advice would you give someone coming on a safari for the very first time?
What I tell my guests is that the bush is vast and the area is bigger than we think sometimes so it is not always easy to find all the animals they want to see but with the help of them and my trained eye I’ll do my best to find and give them the experience they were looking for. I always tell them that anything is possible out here, there are days we see nothing and then there are days we see it all I suppose sometimes its also luck of the draw.

Do you have a favorite animal to view on a game drive? If so, why?
Love watching cats do their thing, but when it comes to monkeys, I could literally watch them all day. They are always doing something new or interesting, they always make me and my guests laugh. As much as they are always wary about what’s going on they always seem to be having fun. For example, the other day myself and guests where watching baboons, some were on the lookout while others were sliding down a fig tree. We found it so interesting to watch how they can be serious but have fun at the same time and how the hierarchy works between them.

What do you love best about living in the bush?
What I love best about living in the bush is that I have the opportunity to get out there and find new things to observe and learn about, to go to the same spot every day if need be to see these animals making progress. Being out in the bush allows you to learn about small things, big things, how they move, where they are going and why they do the things they do on a daily basis. Waking up to the sounds of the bush also makes my day. Animals at most times can be quite vocal when it comes to expressing themselves, so get to be able to get up close and find out what is actually going on can be quite fascinating.


Posted by Rhino River Lodge at 1:04 AM No comments: