On the sundowner drive yesterday we caught up with our three “big boys”, the male lions.  I had four guests in the car, and as the first fellow ambled along the clicking of camera shutters increased markedly.  Lion #1 was followed by # 2 and a little later by #3, and they were quite content to settle in the grass.  Showing off for the cameras they rolled around, yawned and stretched and #3 even came closer to the vehicle, about 5 metres away, flopping down and acting pretty much like any cat.

While we were concentrating on #3, out of the corner of my eye I saw movement, and we all got to see #1 jump up and pounce on something.  #2 joined in what must have been an unsuccessful hunt, but #1 was quicker and we heard great squealing.  I managed to get the vehicle closer and we saw #1 had caught a small warthog and was settling down to eat, with the most graphic crunching and munching sounds.  #2 was keen to get a share, but was more distracted by the closeness of the game drive vehicle and the whirr of camera shutters.  #1 took this moment to move his kill a little further away, chewing and chomping even more furiously. #2 quickly followed to grab what he could.  Poor #3 was left right out of the action.

When dinner was done the boys settled their stomachs with more stretching and rolling, (and posing for cameras), and then it was time to for us to move on.

Male lions generally mark the lions’ territory, and they range over a few kilometers moving far away from the female hunts.  So the boys have to fend for themselves, and sort out their own supper snacks.  Nature is quite OK with this, one of the other spectators to this hunt was a male Nyala who kept an eye on much of the proceedings from a safe distance, until caution got the better of him and he slunk away into the bush.

As for Duze and guests, it was time to head to a different spot for our own sundowners and marvel at the big cats’ display (and bemoan the camera batteries which were now flat!).
Posted by Rhino River Lodge at 4:07 AM No comments: 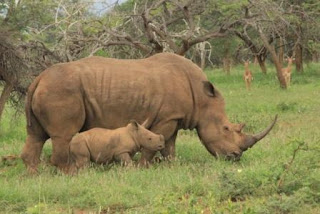 After all the great rains, everything is a lot greener, which means a lot of food around and therefore all the game has started giving birth.
This is young mother with her calf, only a few days old and still wobbly on its feet.  It is nice to see how well she is taking care of it.  Rhinos have an amazing maternal bond with their offspring. They are very protective, which makes it very difficult for predators to catch any of the calves.  This mother will protect her calf until it is about 2-3 years old, then it will have to fend for itself, for the mother would more than likely have another calf on the way, and it would be difficult for her to protect them both. It is possible that this calf might join another female who is calf less or another group of sub -adult rhinos, due to safety in numbers.  When rhino calves are about 6.5-7 years old they are sexually mature, and the males especially  will then try and find a mate of  their own with which they can bread.  Rhinos are not monogamous , as their gestation periods are very long, and it takes them a while to reach sexual maturity,  so this means that one female can only give birth to one calf about ever 2-3 years, so a male rhino will have to impregnate as many females he can so the rhino population can grow.
Rhino’s can Reach a dashing age or 30 years, and then they will still be able to give birth to 1 calf every two years, but rhino like any other animal also has one major enemy, man, unfortunately that is one to many.
Posted by Rhino River Lodge at 1:43 AM No comments: