This month's staff feature is our newest staff member, ranger Ryan Andraos. Ryan has come to us with some great experience and a whole lot of passion for the bush. We get to know a bit about him in the following interview.


What led you to your position at Rhino River Lodge?
At my previous lodge I started out as a Field guide and History Battlefields guide but I was tempted into management and thus began managing the lodge and Environmental Education Centre. This meant long hours in admin and the other laborious indoor tasks that come with management so I decided to appreciate the experience but move on and get back into field work. I love Zululand, it’s a place with so much history, culture and wildlife and so when I saw an ad for a position at RRL I knew it was where I wanted to be!

What aspect of your new position are you most excited about?
Sho there are so many… Being in the bush, interacting with different people on a daily basis, portraying our beautiful country in a positive light to international tourists and getting to see some incredible animals and their behavior. It’s like one of those adventure books you read as a young kid, full of excitement and exploration!

What is your favorite part of being a game ranger?
You learn something new every day! Not even the best scientists and researchers ‘know it all’, so I learn things from other rangers, from what I see on a day to day basis and sometimes I even learn new things about the bush from our guests. Our jobs are not jobs, we live for a passion and it makes the long hours all worth it!


What advice would you give someone coming on safari for the very first time?
Appreciate the landscapes and the simplicity of life in the bush, too many tourists put high expectations on themselves and their guide to find Big 5 and elusive animals, this is understandable but I think it’s also a great pity. The Zululand region is absolutely beautiful, the views and vistas, sunrises and sunsets, colours and sounds, night sky and distant mountains all make for an incredible experience and are undoubtably good for the soul. These wild places are few and far between and need to be appreciated and taken in. I think it’s important for any person to get into the bush and just be; no schedules, phones, music, etc. it’s an amazing experience and immensely healthy for us but seldom done or appreciated.

Do you have a favourite animal to view on game drives? If so, why?
There are lots! Every animal brings a different act to the play that is the African Bush! White Rhino’s introduce peace and tranquility, Black Rhino’s are all about enthusiasm and energy, Elephants are about intelligence and care for one another, it’s really important to appreciate each animal and their separate personalities. But I think my best animal to view and perhaps even touch on a game drive is a Chameleon. Guests go crazy when you spot a chameleon and pick it up and give them a chance to see it up and close or even touch it, it’s often a memory they will cherish for a long time! Game drives often lack that practical interaction and so I try to bring things into the vehicles, small organisms, dung, bones etc. Chameleons are great, they are colourful, very unusual, intricate and rather harmless, so my highlight is finding one of these little guys for guests. 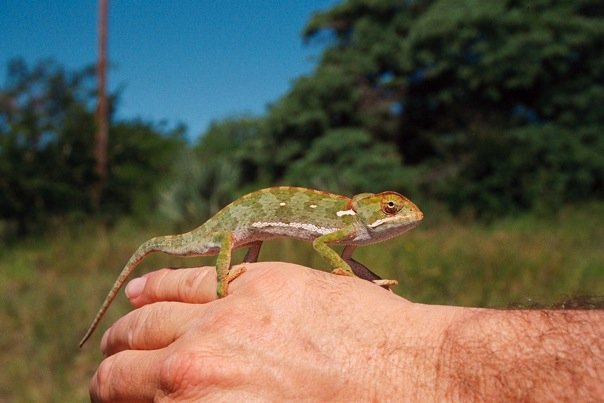 What do you love best about living in the bush?
The lack of restriction, freedom, wide open spaces and the people. I have lived in the bush for 6 years now and I don’t think I could return to suburban life. I love hiking to the tops of mountains, driving my motorbike on back roads, trail running along cattle tracks, swimming in rivers and so much more. How could this not sound appealing to people!? And as silly as it sounds I love living in the bush because of the people, the bush attracts some incredible people, bush people are fun-loving, laid back, have an intricate care for the environment and generally always keen for a little fun and adventure. Living in the bush can be tough but I believe the pros far outweigh the cons!
Posted by Rhino River Lodge at 12:10 AM No comments:

While on a game drive, Rhino River Lodge guests came across a hyena with a snare around its neck. Springing into action, the team from the Zululand Rhino Reserve and Rhino River Lodge spent the next three days dedicated to making sure that they were able to remove it. Ranger Frances Hannah was having a morning like many other mornings, winding down from a fruitful game drive:

“The sun was baking, it had been a successful morning with the wild dogs up the fence line, but they had settled under some shady trees for the morning so we set off back to the lodge with expectations of bacon and eggs. That’s when we saw her, trotting up the road in front of us – that sloping back, her erratic spots and her large paws – a spotted hyena! What luck, as our population of spotted hyena is still quite small.

As we drove closer, she calmly plonked herself down on a mound of dirt and watched us. Amazing. I grabbed my binoculars to have a closer look, and that was when I saw her shimmering necklace. This was not the kind of necklace you want to wear. This necklace was a symbol of death. It was so tight that it cut into her skin, exposing her pink flesh. It was a wire snare, and from the looks of it, she had been wearing it for some time.” “She must have got her neck caught in the wire contraption and the harder she tried to escape the noose, the tighter it pulled, nearly killing her! I called our general manager, Dale Airton, straight away. He asked us to stay with her until he could get there. And so the waiting began.

Thoughts of bacon and eggs quickly dissolved as we observed this beautiful creature and all felt pity for what man had bestowed upon her. The soft rumble of an engine murmured in the distance – help was on its way! The wildlife vet was on standby and we had back-up coming to monitor her. We left the scene with heavy hearts but we had faith in the team that was preparing to release her from her choker.

As Dale approached her, she swiftly disappeared down a warthog burrow that she had been sitting near. It was her den! And so started the three-day episode to get her out of her hole. From the looks on my guests’ faces, they would gladly have camped outside her den to free her – bacon or not.”

Frances’ game drive was lucky to spot the injured animal, particularly in a location next to a den, so the chance of her staying where we could relocate her was high. Reserve and lodge staff, accompanied by wildlife vet, Mike Toft, staked out her den looking for an opportunity to dart and treat her. Conservation work is exciting and rewarding but often there is a lot of waiting involved and, after a long day’s hard work, the wait can feel interminable. On the first and second nights, staff retired from the evening disappointed and frustrated that they had not been successful. However, they say the third time’s a charm and, sure enough, on the third night an opportunity finally presented itself and the vet was able to dart her. Though it looked severe, Dr. Toft felt that the injury would heal itself easily and that the hyena should recover just fine. The hyena’s ‘necklace’ was not a rarity. Snares are a common form of illegal hunting in game reserves across the continent of Africa. They are cheap, easy to manufacture and effective.

A snare consists of a wire tied to something secure (e.g. a tree) that ends in a loop fastened with a slipknot. When an animal passes through a snare, the tension tightens the loop around whatever body part has unluckily ended up in the mechanism. If the animal is stronger than the snare, as is the case for rhino or hyena, then they can struggle and break away from the anchor. Unfortunately, the tightened wire remains in place, meaning the animal may still die from their injury or infection. Many other animals are unable to break free and die attached to the snare or when the poacher returns to collect their bounty. Snares are a cruel and indiscriminate method of poaching, and are wreaking havoc in populations of endangered predators like African wild dogs and cheetahs. Thanks to ranger Frances’ quick thinking, her guests’ patience, and the reserve and lodge staff’s hard work, we were able to see a happy end to a sad story. There was a second hyena hanging around the den site as well, and though we aren’t sure of the sex of the second animal or the relationship between the two, we are all hoping that one day in the not-too-distant future we may be lucky enough to have hyena pups running around. For now we are all happy with the occasional sighting of the two hyenas near their den and hearing the characteristic ‘whoo-ooop’ echoing through the night. 
Posted by Rhino River Lodge at 4:25 AM No comments:

The beauty of birds

On an African safari most people are focused on the wildlife. And rightfully so, as Africa boasts some of the most impressive animals in the world. But, if you pause for a minute and look beyond the beasts, you will find another layer of beauty in the African bush.

The dazzling variety of birds that can be seen on safari adds a whole new level of appreciation for Africa’s wildlife. At Rhino River Lodge we are lucky to have some of the most beautiful and rare species of birds in southern Africa. The colours of some species alone are enough to take your breath away.

Then there are birds that capture the imagination with their flamboyant plumage or features:

here are birds that capture the imagination with their flamboyant plumage or features: - See more at: http://africageographic.com/blog/the-beauty-of-birds/#sthash.Doq5Rjen.dpuf

The sky isn't the only place on looks for birds on safari. Many species spend much of their time on the ground foraging and nesting.


Finally, there are those birds that everyone wants to see-the birds of prey.

So next time you are on safari, get out those binoculars, sharpen those ears and try taking a look at all the wild and wonderful birds that call this beautiful continent home! You'll be amazed by what you see.


Posted by Rhino River Lodge at 4:10 AM No comments: