There is a beautiful little Leopard that we have been very lucky to see every now and then. I have mentioned a great sighting we had of it in a previous post, but we have been seeing the little thing a bit more frequently since then.

Dale had a great sighting of her right on the main road one night on his way home, and Isaac managed to find her one night on a game drive.
Isaac left camp one chilly evening at around 8pm with just two guests. They set out and about 2 hours later Isaac radio'd me back at camp to say that he'd found the Leopard. We had a few other people in camp so I loaded everyone up and out we headed to see if we could maybe find it. Unfortunately, the Little Leopard had moved on by the time we got to the place it had been spotted but Isaac said he was really lucky as the guest had found it's eyes with the spotlight and they'd managed to sit with her for about 15 minutes while she relaxed under a tree! 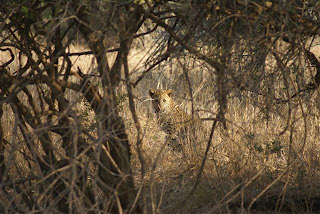 This is a picture we managed to get of her the last time we saw her on a kill, you can read about that sighting here:
http://blog.rhinoriverlodge.co.za/2010/09/rangers-report-august.html

There has also been great excitement on the Cheetah front. I had them up on a ridge, right next to the vehicle where we watched them for a good hour while they marked their territory and lazed around in the sun. It was a coalition of one older male, and one younger male who always hang out together.  They were pretty relaxed and completely unfazed at us being there, so we followed them as they meandered up the ridge, stopping every so often to gaze intently at a nearby Warthog or Impala, but neither one making any serious moves to start stalking. It was such an insanely special sighting that we all had goosebumps on our arms, and I conferred on numerous occassions with my guests about how lucky we were to get the sighting all to ourselves, and have the big cats choose to come so close to the vehicle and allowing us inside their comfort zone! That day for me will never be forgotten, and I hope the guests that shared the experience feel the same.
After 2 days, I came across a dead reedbuck about 2 metres from the road. I stepped out of the vehicle after looking around for a few minutes and was trying to figure out how the animal had died. I couldn't see any flesh wounds and I suspected that the animal had died from natural causes. As I walked over to the carcass, I looked up and not even 3 metres behind the carcass I saw movement in the grass. A Cheetah lifted it's head, and all the hairs down the animals back were raised. A sure sign that this animal was not too happy! I stopped dead in my tracks, and started backing up slowly towards the vehicle. All I kept thinking was how embarrassed I'd be if I were charged by a Cheetah infront of a vehicle full of guests! I turned back to my guests and told them that the Cheetah was nearby but they obvioulsy misheard me as they all started agreeing that yes, the Cheetah killed the Reedbuck. I pointed in the direction of the Cheetah and then all the pieces of the puzzle fell into place for the guests and I heard a unanimous whisper of "There's the Cheetah!"
This time, we presume I had bumped into a lone female who is not in our area too often which makes it a little more special to see...
Posted by Rhino River Lodge at 10:57 PM No comments:

There must be a very tired Stork somewhere after delivering a few special parcels with us at Rhino River. The babies we have wondering around now include a few new Giraffe, some very little Nyala lambs and a brand new baby White Rhino!

On a game drive recently, I took a route that is not often used and we came across the female white rhino with her new little calf. Very cute little thing, although we are not too sure of its sex yet. It was bouncing around trying to dislodge the Oxpeckers that had taken up residence on its face.
After leaving them, and rounding a corner, one of the guests said that she could see a little something in the bushes next to the vehicle. After catching a glance at the movement under the bush, I realised we were actually watching two young Black Backed Jackal pups and they were just outside their den! Adorable little guys...
Another great sighting was on a routine maintenance drive when I heard something scurrying next to the road. I stopped the vehicle to discover two tiny newborn baby Warthogs that had obviously made their way out of the burrow and couldn’t find their way back in. They were a fair distance from an obviously occupied burrow as there were flies circling the entrance way, I couldn’t leave these little guys to the elements and I decided to intervene. I contacted Dale via radio and he warned me that if the piglets screamed, the mother would not be very happy with me! Warthogs can be quite dangerous and they actually enter their burrows backwards in order to be facing any intruders that might make their way into the burrows. After deliberating for a while I left them to carry on with my work and decided to stop by on my way home again. An hour later, I made my way back to the burrow to discover only one Piglet out in the sun, curled up in a ball. I prodded the little guy to check if it would squeal and after making sure it was relaxed, I picked him up and took him over to the burrow where I gently (and very quietly!) pushed him back in. Unfortunately after searching the bushes quite thoroughly for the second piglet, I had to trust that it had found his own way back in or that Mamma Warthog had come out to get it.

Oh, and the Cheetah and Leopard have been around...but I wouldn’t want to bore you with that, so I’ll leave it for another post... :)

I have also decided that because we have so many great experiences and sightings and stories to tell, I will be updating the blog more regularly.
Signing off...
Posted by Rhino River Lodge at 1:13 AM No comments: